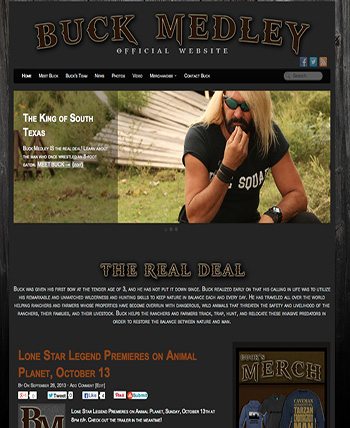 BHM is proud to announce the launch of Buck Medley’s new website. For those who aren’t familiar yet, Buck is the star of Animal Planet’s new reality television series: “Lone Star Legend.”

“LONE STAR LEGEND follows Buck Medley, the owner and founder of Monster Masters in South Texas, as he, his crew, and his family work to maintain the balance between nature and man by helping clients with their wild animal issues. Whether they’re relocating alligators that are decimating a wallaby ranch, removing a skunk from a rancher’s hog trailer, or finding a diseased nilgai antelope before it spreads its fatal illness to a rancher’s livestock.

Each 30-minute episode chronicles Buck and his crew finishing two jobs, as they use any tools at their disposal, including tracking dogs, helicopters, and jeeps. Buck is responsible for over 200,000 acres of ranchland in South Texas, and he’s joined by: Catfish Mitch, one of the Buck Crew, who’s grown up in the woods his whole life; Ryder, another member of the Buck Crew, who assists in any way he can, including making sure that none of them get bit; Todd Foster, a veteran ranch hand who works closely with Buck; his son Bucky and his wife Margret Ann Medley to whom he’s been married for 24 years.”